Alexander the Great - King of Macedonia

The year was 336 B.C. and the place was Pella, the ancient capital of
Macedonia. Olympias, daughter of Neoptolemus the king of Epirus, gives birth to a baby boy. And King Philip II of Macedonia, son of Amyntas II, becomes the proud father of a child destined to become conqueror of the world. 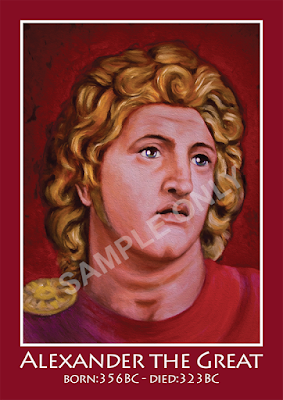 Alexander lll of Macedon, commonly known as Alexander the Great, was one of history's greatest military commanders. His genius as conqueror of the then civilised world including the Persian Empire, was inspiration for later conquerors such as Hannibal the Carthaginian, the Romans Pompey and Caesar, and Napoleon.

After the murder of his father Philip, and his inheritance of the Macedonian kingdom, Alexander quickly dealt with his domestic enemies to assure is power. His military  march east propelled him in a conquest of the Persian empire. In Egypt he was honoured as a god-king similar to the pharaohs of old.

Alexander died suddenly at the age of 33, in Babylon from an unknown malady. He founded more than 70 cities and creating an empire stretching three continents.

Alexander's features are to this day a mystery, however a well known greek painter of the time (Apelles) usually portrayed Alexander as a dark haired, brown eyed individual. But because Apelles was born about forty seven years after Alexander's death, how accurate his paintings were to Alexander's true features is debatable.

Consensus among some historians is that Alexander was an athletic individual with blue/green eyes (like the Aegean Sea), dark blonde hair (like a lion's mane) and fair skinned, with a ruddy tinge to his face and chest.
And many Macedonians of those ancient times were said to be fairer of hair and skin with lighter eye colour. 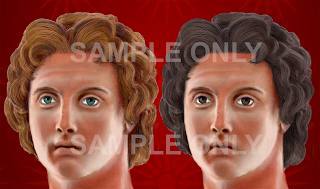 An artist of over thirty years, I have always endeavoured to create artwork that is appreciated by my supporters. Thus I have also created two faces with alternative hair and eye colour as one picture.

And because of my desire to paint an accurate portrait of Alexander from known historians' descriptions, I believe I've composed what could very well represent his true likeness. Using ancient sculptures of Alexander as examples, and researching various literature with depictions of his skin, eye and hair colour, I believe my painted portrait faithfully portrays a popular representation. The top painting was created using mainly the bust titled (Alexander-Helios - In Capitoline Museum, Rome) as inspiration.

I am now able to offer either artwork for sale, as portrait prints and portrait merchandise to collectors of Alexander the Great memorabilia. And for those who required the extra service of a finished framed picture, my prices are very competitive.

To view more my artwork or wish to contact me, please send me your details and I'll get back to you. www.artbyrimbas.com